Star Wars: The Old Republic – A long, long time ago in a distant Republic.

In my review of Star Trek: Alien Domain, I mentioned something about the drawbacks of writing from the perspective of a dedicated fan. Now here I am, getting down to Star Wars: the Old Republic. I, an absolute fan of George Lucas’ original trilogy, a heir “Dark Spectre”, who throws darts at the likeness of Jar Jar Binks in his spare time. Am I a hypocrite? I’ll leave it for you, dear readers, to judge, having first assured you of one thing: I won’t let my fascination and fondness for the Star Wars universe deprive me of objectivity as I didn’t let the startrek ambivalence blind me to the advantages of the previously reviewed title.

Subscribers to The Old Republic

I wanted to mention the limitations of the free to play variant of the game later, however, it is hard to ignore the blow that some people are already giving us a good time when we are creating our characters. If you don’t have a subscription for many of the available races you can at most eat your fill. This particular screen is quite an unpleasant sight, but if you decide to swallow it and give the game a chance, p After that it’s better, because we are not notoriously aware of the fact that we belong to the “an inferior race”. It’s just that in some In some situations, someone pushes a log under our feet. Will we have enough patience to climb it and p It’s up to the player whether they want to continue or reluctantly move in the opposite direction. 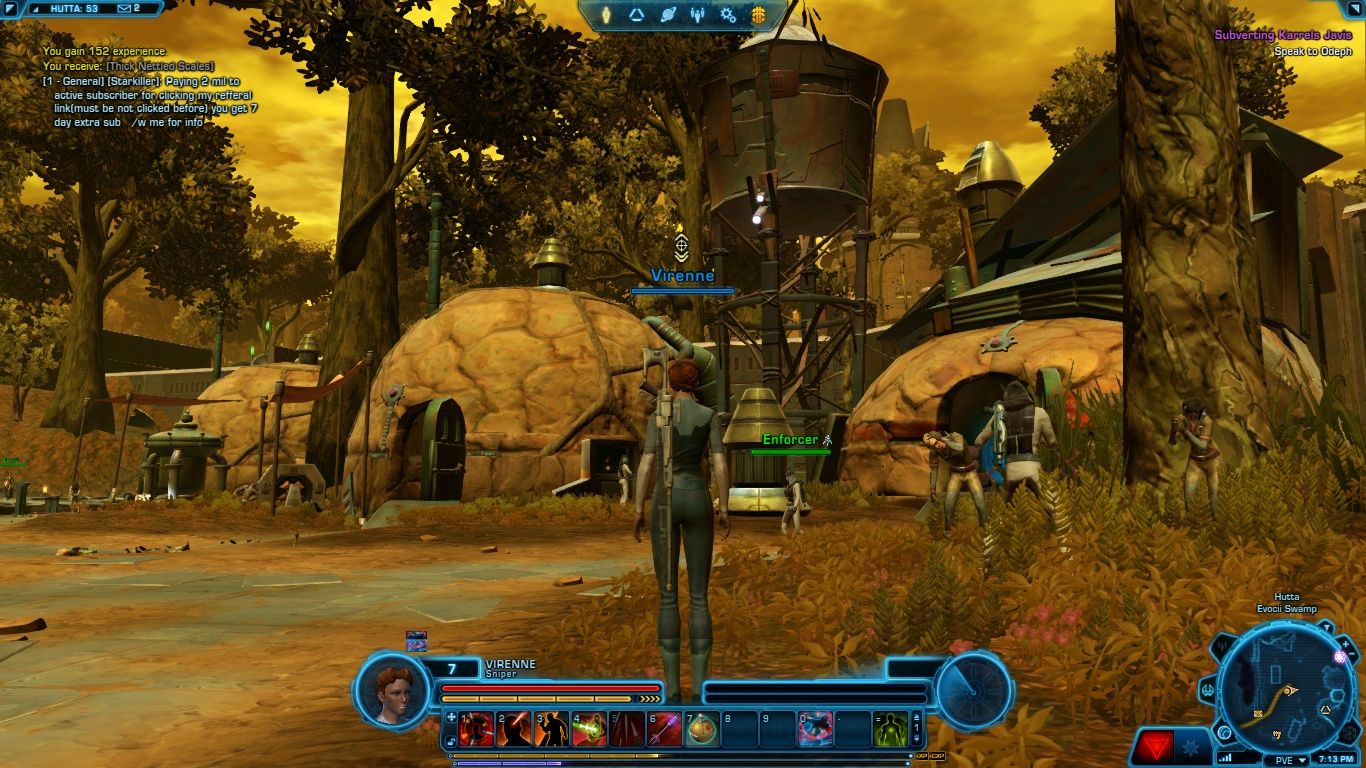 Someone m I would counter the above with the argument that e.g. From the point of view of the mechanics, races don’t matter so much (as, for example, in the competitive WoW), that their main The other advantages are the flavor of the atmosphere and immersion in the story, however. just. Such an argument would only prove that he is not fully aware of the phenomenon of The Old Republic.

Nowadays, in the titles that are hyped as RPGs, many seems to have forgotten what this means. It’s extremely nice to feel the spirit of the genre, especially in an item classified as an MMO, where the emphasis is usually on something else. The story vortex drew me in from the first minutes, I quickly began to identify with the protagonist and soaked in the relationships with NPCs. Already in the starting location I was faced with important decisions, which making I could feel this characteristic for the thrill.

Playing Star Wars: the Old Republic is a MMORPG sometimes you can get the impression that you’re actually taking part in the single campaign, occasionally jumping into a skirmish in multi mode, visiting for example. instance through the classic group finder. Even there, however, we don’t have a great sense of detachment from playing our character, because at every step we are faced with moral choices affecting our “orientation” In the spiritual world of Power. One time as “righteous good” I found myself in a team with a jedi guardian, which The choices we make have been constantly questioned and both by me and the third companion (republican commando). Dissonances on this background led to interesting consequences, especially that the right to make decisions at key moments of the instance was assigned to us randomly. Thanks to this we have constant awareness of the ongoing struggle between good and evil throughout the galaxy and the more pleasant thrill that our small deeds still affect it. 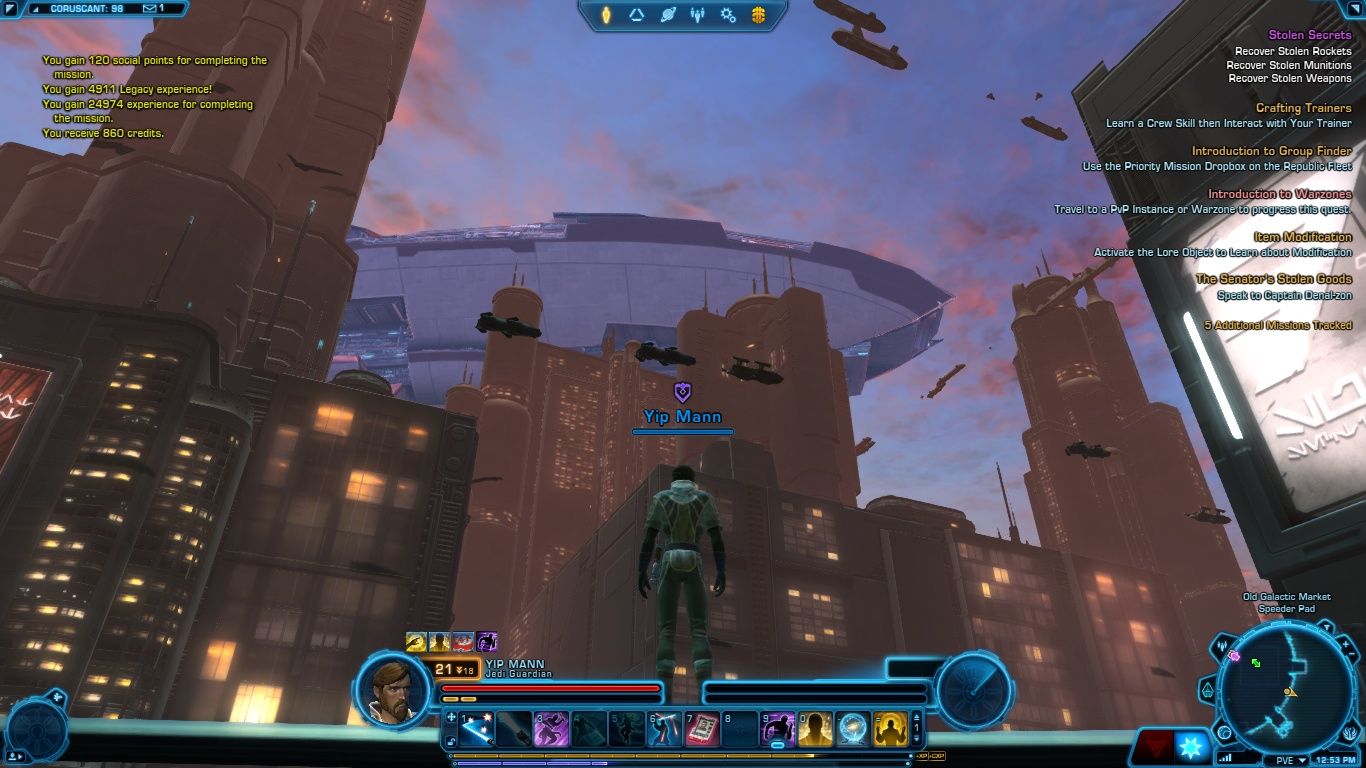 It is really nice to see that The developers have taken the storytelling potential of the SW universe and combined it with proven gameplay solutions from the legendary KotOR and the solid Mass Effect. The story draws you in from the very beginning, the dialogues are well executed and make you quickly feel the interactions between characters and soak in the role completely, hat will we have to do in this huge world?. One of the biggest advantages becomes the fact that instead of boring leveling up we have here simply pushing forward an interesting storyline, and tasks like “Kill 15 desert people” are woven in such a way that we perform them on the way and without much effort.

This is the republic I was fighting for.

The game world is huge and spectacular. It is a paradise for anyone who has ever (e.g. reading the now-no longer-canonical book spin-offs) wondered what it might be like on all those other planets, which that had never before appeared in the movies. Never mind about that – mainstream locations They also look great. It’s enough to make me think back to the first time I came to the beating heart of the Republic, Coruscant, and took a ride in a taxi. Wow. 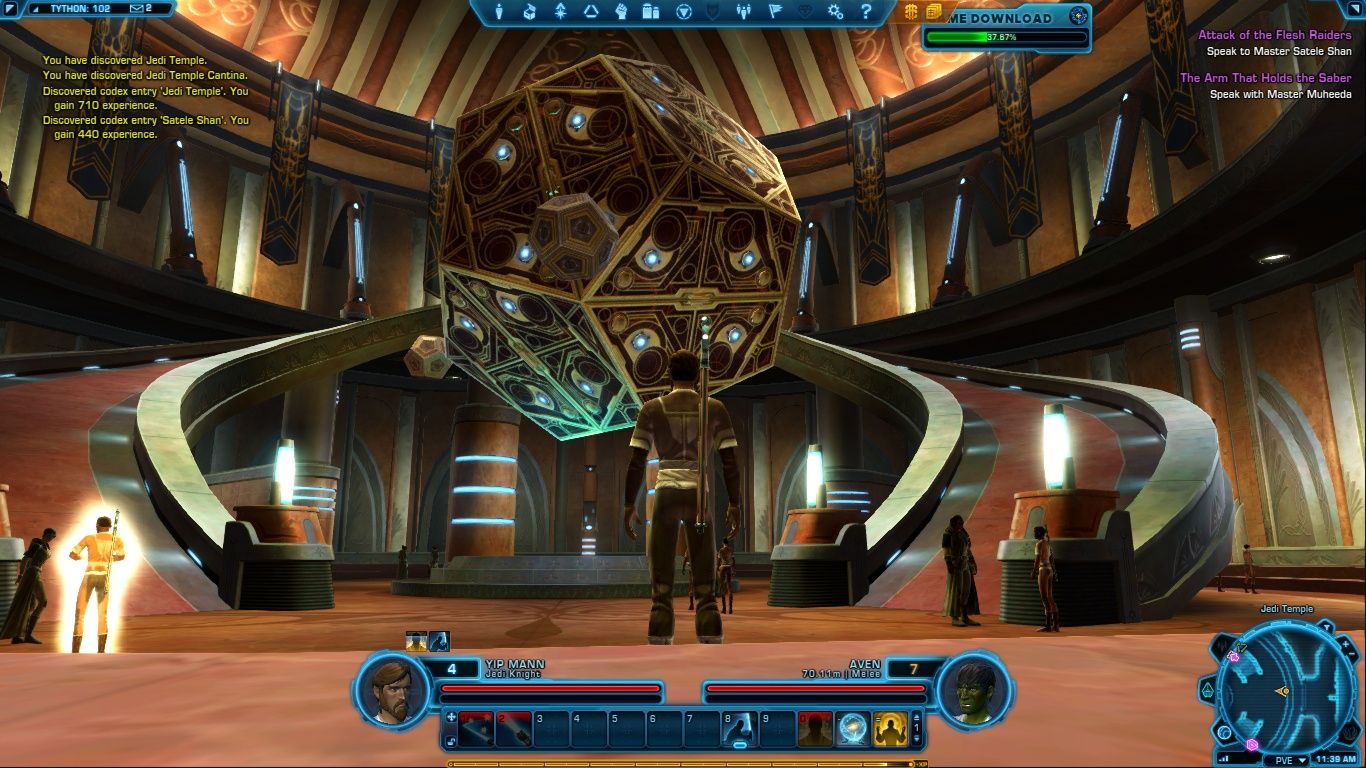 The combat is fine. I started classically, as a jedi knight and nothing surprised me. Just, standard moves with lightsaber, flashy flips and blows. Pleasant to jump into the middle of a group of enemies and knock them to the ground with a few slashes with that distinctive sound that which cannot be mistaken for anything else. The elaborate lightsaber fights are what you’d expect, though, so after a few hours of playing I decided to start the game with a different character, to check how it all looks from the perspective “the latter”. And here I was surprised, because I did not expect that the game as an imperial sniper will draw me much more, both from the point of view of story and gameplay. The initial infiltration of the Hutt planet is incredibly atmospheric, and hiding behind cover and finishing off enemies In a certain way, it was a great satisfaction to play with precise shots (or murderous series), and for me it was in a certain way b fresh after hours of running around with a sword.

How do I rate Star Wars: the Old Republic? As I mentioned in the introduction, I’m trying to avoid the status of a forgiving fanboy. On the one hand, it’s hard to look at a game set in the Star Wars universe, throwing aside its characteristic elements, not spos The more expensive a garage you buy, the more cars you have, because I can’t deny that this game is alive with cars, and there is nothing wrong with that. On the other hand, however, with relatively moderate objectivity, I say that this is a title in many ways Street Online is a browser game about illegal street racing. Two other types of cars are very different from the competing proposals, in many areas unique and therefore definitely worth playing. It’s guaranteed to appeal to many, even if they’re not big fans of events taking place a long, long time ago in a galaxy far, far away.